Blog|Exchange|Crypto Burning: What Is It And How It Impacts Investors
Published April 26, 2022|6 min read

Crypto Burning: What Is It And How It Impacts Investors

The twenty-first century is marked by digitalization, the summit of which is represented by cryptocurrency nowadays. Surely, nearly everyone has heard about it, but if you were to dig deeper, you would bump into such thing as cryptocurrency burning. It doesn’t make any sense: how can one burn a crypto coin? Don’t worry; no fires are expected since this is just a figure of speech. But what does burning crypto mean then? Let us explain.

What Does Burning Crypto Mean?

This action takes place when developers, miners, or coin owners purposely destroy a coin. This destruction is also known as the burning of a token. They do it by transferring a set amount of cryptocurrency to a specific wallet whose address is out of access, thus making the coins unusable for further actions (trading, exchange, etc.).

How Did It Begin?

The concept of token burn is likely derived from a share repurchase. The latter is applied when a company buys back its own shares from the marketplace in order to boost its value. Some part of repurchased shares is absorbed by the company. As a result, reducing the number of freely trading shares leads to an increase in the ownership percentage of shares. Of course, it would be a mistake to put the equal sign between coin burning and share buyback, but they both serve a similar purpose.

Historically speaking, coin burning can be traced back to 2017, when the biggest players on the market began to apply it in order to create a deficit, slash inflation, and increase value. Since then, it has become a trait of any new token, as it allows developers to lure new buyers with low prices and later create demand. 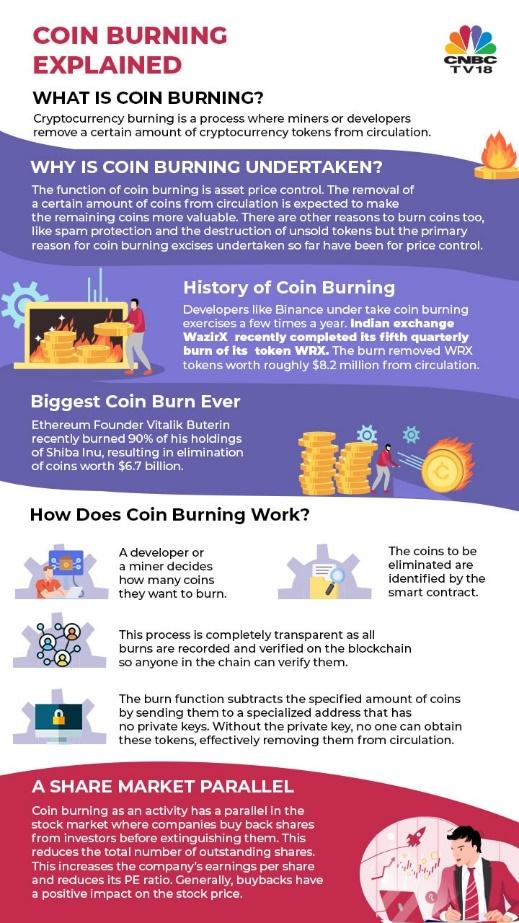 There are two main reasons for coin burn, and they are very simple: to increase the token value and boost the demand. The supply is artificially limited, resulting in a larger market price. However, there are still critical points of token burn that should be considered. For example:

Let’s take a closer look at those vital points.

When Is This Done?

The spam protection feature of crypto burning helps a marketplace avoid DDoS (distributed denial-of-service) attacks and prevents the possibility of network lag created by the spam transaction process. Basically, people have to pay a fee for their financial crypto operations. For example, Bitcoin and Ethereum implemented this particular fee scheme. However, since August 2021, Ethereum has been using a new algorithm resulting in burning this fee rather than just transferring it back to the company.

As the crypto world is marked as decentralized, it needs some rules and guidelines to keep it safe and running. Contrary to centralized systems, where there is an authority checking, adding, and editing data, decentralized platforms use a framework called a consensus mechanism. It is a set of rules and actions that every user has to abide by to maintain the legitimacy of the blockchain. The most prominent algorithms are proof of work and proof of stake. However, coin burning (proof of burn) is also quite widespread.

Crypto burning is also used by a company to indicate the long-run dedication to its coin. While making their users a little bit richer, they can also get rid of excessive ICO coins. The company can create a burning schedule or hold it as a once-in-a-lifetime event.

Which Tokens Can Be Burned?

In theory, every coin can be burnt. There is no specific rule that forbids the owner to do so since everyone who holds a coin can transfer it to a no-access address, as has been stated previously. Here are the most recent burn actions:

What Is Proof of Burn?

We’ve already mentioned proof of burn as one of the methods for maintaining blockchain integrity. It’s relatively new and adds another option for validating transactions.

Obviously, the basics of this method lie in the process of burning tokens. When a miner wants to obtain (mine) a particular amount of coins, they are allowed to burn a proportional number of virtual tokens in order to do so.

There are two main ways of ensuring proof of burn:

Burning a native coin, which is going to be mined

Destroying some alternative token, e.g. Bitcoin, if allowed by the blockchain

In a case of a successful burn, you will be granted a native token of the blockchain as a reward.

How to Burn Crypto Coins

At this point, the question “What does burning crypto mean?” is explained, right? Ok, one more time: it is a process of sending crypto coins to a specific wallet, which will prevent any further manipulation with the amount sent. That is if you’re good with a short version.

However, it brings up another important issue: how to burn crypto coins. Don’t worry, it’s quite simple. The whole algorithm looks as follows:

Keep in mind that this is a permanent action, and it cannot be undone. By sending your coins to an inaccessible address, you will lose them forever.

What Impact Does Crypto Burning Have?

While economists and financial analysts debate the effectiveness of burning crypto, it is undeniable that it implies a particular influence on the market and investors.

As cryptocurrency is deflationary in nature, the concept of burning is applied to cut the number of available tokens and thus exert a stabilizing action on the prices, theoretically resulting in a more solid market.

Also, similarly to fiat currencies, any change in a coin’s value is going to influence other assets on the market.

When it comes to the importance of coin burn for investors, we can distinguish two main benefits:

The proof of burn algorithm ensures the security and validity of any transaction.

Coin burn serves as an indicator of price regulation, meaning that this currency is going to be more stable for further investment.

It is important to emphasize that the destruction of tokens is a new legal method of regulating the industry and a matter of great interest to crypto scientists and enthusiasts from all over the world. Therefore new functions and impacts of a crypto burn may arrive in the future.

Cryptocurrencies become more and more integrated into our world with each day. New types of crypto coins are invented with lightning speed, and if we want to keep pace with times, we should pay close attention to the crypto industry. Broadening one’s knowledge about different types of blockchains, tokens, and contributory concepts is a must, especially if you want to make the first investment. What does burning crypto mean? Now you know the answer. The burning of crypto coins is a relatively new concept, but it has already proven its usefulness in stabilizing prices and ensuring transaction safety. Thus, take our advice and include crypto burn into your investments decisions, as it will make them more profitable.

What Does Burning Crypto Mean?

It is a process of permanent destruction of a particular cryptocurrency amount by making it inaccessible for any further actions.

How to Burn Crypto Coins?

In order to burn tokens, you have to set a specific amount of the coins and transfer it to an e-wallet that has just a payment acceptance function. After the coins are transferred, it will become impossible to get them back.

What Impact Does Crypto Burning Have?

It imposes effects on two parties: the market and investors. The influence on the market is outlined by price stabilization and possible changes in interrelationships among cryptocurrencies. The impact on investors comprises coin self-regulation and enhanced transaction security (proof of burn).

by CoinMooner Team
Table of Contents
What Does Burning Crypto Mean?What Is Proof of Burn?How to Burn Crypto CoinsWhat Impact Does Crypto Burning Have?ConclusionFrequently Asked Questions