How to Make a Meme Coin: Tutorial for Beginners

Meme coins are a promising area for investing and trading, and many developers are ready to bring a creative aspect to their work. Those who wish to enter this area can familiarize themselves with our experienced advisors’ instructions on how to make a meme coin and real-life examples of how everything works. All you need is a small investment, an interesting idea, and a community that will support your platform and the new kind of cryptocurrency you bring to the market.

Why Does Someone Need to Create a Meme Coin?

Creating a meme-coin is technically quite simple, and you can earn up to 1,000% of the investment amount or even more. That's why you might be interested in delving into this topic.

A meme is a funny viral photo or video that spreads all over the Internet, attracting the attention of a million-strong audience.

In turn, a meme token is one of the cryptocurrency variants based on popular pictures and videos (memes). Initially, it had no use case or real financial or resource value. The creators of meme tokens make money on the popularity of the meme itself. However, even such a token needs a pool of liquidity built into its value and boost it. In short, anyone can create a meme coin, put it on the market, and get a huge profit.

The most striking (and the very first) successful example of a meme coin was the Japanese Shiba Inu dog and Dogecoin's cryptocurrency. It appeared back in 2013 and is still popular.

To better understand how meme coins work and why they get such popularity, it is worth exploring their features:

Meme coins are quite volatile. Community-driven, they can gain popularity through active support from the community and FOMO. This is also the main risk for this type of cryptocurrency since the price may fall on the same grounds - when traders begin to focus on other crypto coins and lose interest in the current one.

Meme coins can have an unlimited or large supply. If Bitcoin, for example, was created as a coin that was not subject to inflation due to the limited supply, things are different for meme coins. DOGE does not have a supply cap at all, while SHIB has a supply of 1 quadrillion tokens. The more coins, the higher inflation. This explains the relatively low cost of meme tokens. In addition, only some of them have a well-developed mechanism for burning coins.

Many developers can figure out how to create a meme coin and enter the market with their product. This generates competition and a decrease in the value of each individual token.

The community of traders and investors is wary of meme tokens because of the high risks of the situation where the developers themselves and the first wave of token holders begin to actively sell them.

The main idea is to really earn on meme tokens, and many people who understand how to make a meme coin are successful in this business. You need to analyze the market, see trends, notice trading features, and follow the news.

The Most Popular Projects

Since its release (in 2013) and until now, Dogecoin (DOGE) and Shiba Inu (SHIB) have been the leaders of the meme coin market. Their popularity is fueled and supported by media personalities, influencers, and businessmen.

They compete with a few more projects:

In total, several hundred meme tokens circulate on the cryptocurrency market, but only 80 of them are considered worthy of investors’ attention.

How to Make a Meme Coin

Analysts emphasize that everyone can figure out how to make a meme coin. The technical aspect is not too complicated. It is better to work in tandem with professional developers who can explain some technical details. But in general, the process takes place in several stages. Be prepared that any token works on Ethereum smart contracts, the execution of which comes with a commission proportional to the load on the network. 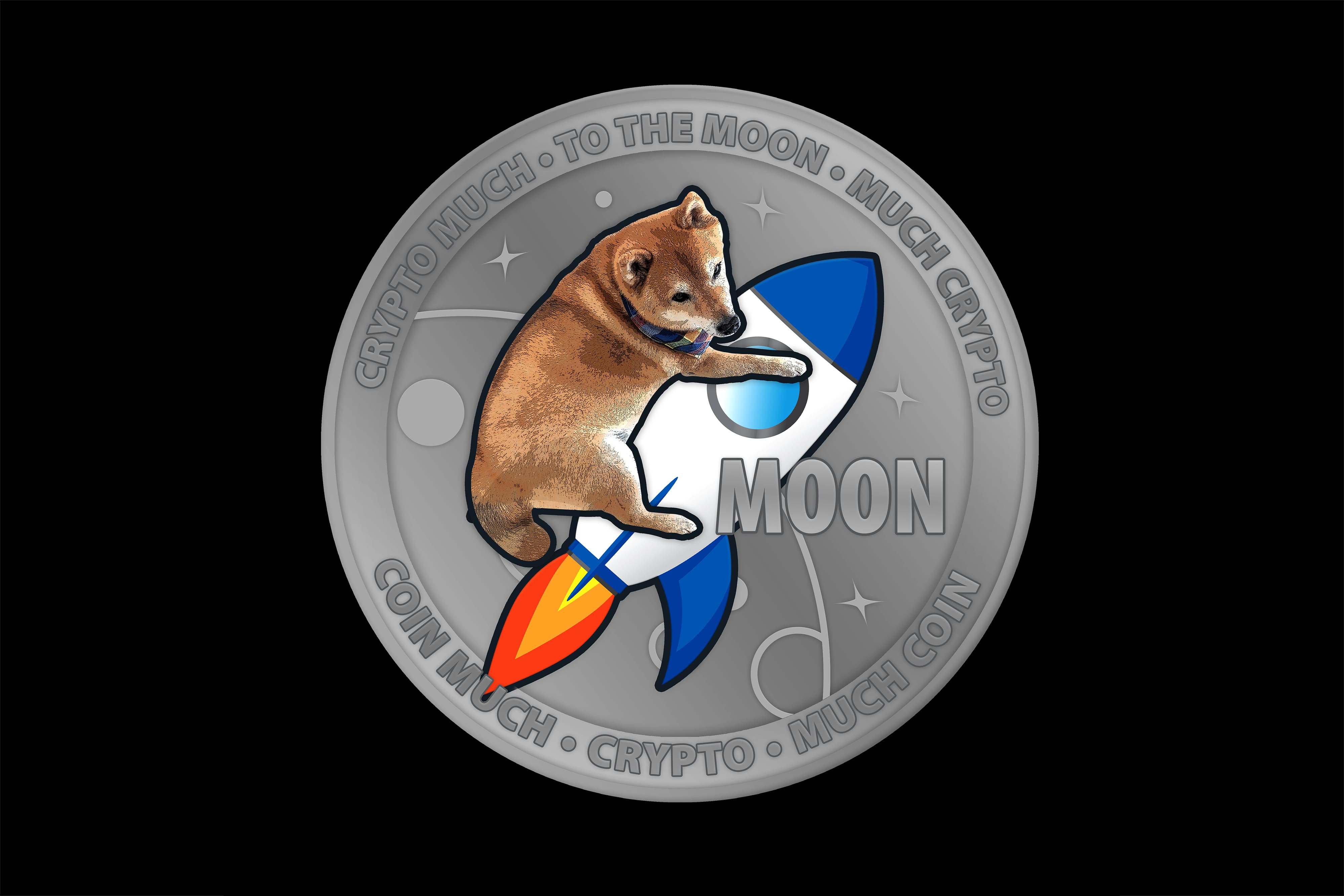 Your token needs a name and logo related to the meme that inspired you to create the coin. You can follow the example of SafeHog and DogeMoon or use original ideas. It is better to come up with a unique logo and name to avoid copyright issues.

Promotion directly affects the popularity and, therefore, the cost of a token. Usually, tutorials on the topic overlook the importance of drawing attention to a new coin. But even if you do some mind-blowing social media marketing and the name of the new meme coin hits the influencer community, people will still want to know more on the official website.

Keep your design simple and visually pleasing by focusing on the benefits your token brings. These should be values ​​shared by a certain community or many people. It is thanks to them, meme coins created 9 years ago have been still developing and growing in price.

A token is created based on a smart contract deployed on a compatible blockchain. This guarantees its security and availability for many users. The easiest way to create a meme coin is using the MetaMask platform, which is the most popular among creators:

Connect and replenish your wallet.

Fill in all the required data and basic characteristics.

What are the features that need to be filled in, enabled, or disabled when creating a token?

Check if all the fields are filled in correctly before you create a meme coin. If everything is fine, click the Create Token button. You will be automatically redirected to the payment page. You need to pay a fee for deploying a smart contract and confirm the operation again. After that, your new meme token with the characteristics you need will be created and ready to function.

This guide is built on the MetaMask platform, but you can also use DxSale and go through the same algorithm. However, it is better to follow the instructions above for interacting with Ethereum smart contracts.

What's next? First, you need to add the token to the Trust Wallet. To do this, open the wallet, click “+,” and “add a custom token.” You have to change the network to Smart Chain and enter the token's address, its name, symbol, number of decimal places, and other details and save this data.

As for the liquidity pool, it can be created on any AMM protocol, for example, Uniswap. After that, your task is to build the widest possible community of users, which will facilitate the purchase and exchange of the token and create its real value.

How to Launch the Project

Then, the stage of product promotion begins, and this is the most interesting part since the coin will never gain value with no interest from a community. You can attract attention in different ways.

Listing on stock exchanges is one of the main promotion tools. While an altcoin is little known to investors and traders, it is worth adding it only to small decentralized exchanges. After that, you can add the coin to aggregators, such as Coinmarketcap or Coingecko. But first, you need to draw up documentation for the token, particularly white paper.

The main thing experts agree on is that there should be a lot of hype and attention around a meme coin created, and the marketing strategy. It is optimal if a prominent media personality like Elon Musk appears in this context (thanks to his tweets that Dogecoin gained popularity in its time).

Another organic way to generate interest in a cryptocurrency is by integrating it into a worthwhile project, a startup, or a socially useful/financially beneficial idea that many people can like. From this perspective, the token can become an investment option in a particular project.

Create viral content, use all available marketing tools, and don't let the hype die down until the project gains momentum.

Many social networks do not allow targeted advertising on the topic of cryptocurrencies. But there are other ways to appear on them and be heard. These are all kinds of collaborations, projects, news, etc. Today, TikTok is considered the best medium for effective and safe meme coin promotion.

The best example of how influencers affect the value of tokens is Elon Musk's statements. Other influencers and big bloggers are also able to influence the price. So, if you are interested in how to make a meme coin popular, you can send a huge part of the coins to celebrities. It is this method that formed the basis of Shiba Inu's popularity.

Will You Need an ICO to Make a Meme Coin?

Planning an ICO (Initial Coin Offering) is harder today than it used to be. It has more control, oversight, and documentation requirements. Instead, media interest in ICOs has declined significantly. Bitcoin became popular precisely after this procedure since all the media only talked about the wealth that came to the cryptocurrency holders.

Also, ICO is losing its significance due to high competition among many new crypto-coins. For these reasons, pre-sales of coins began to enjoy greater popularity and IEO - the withdrawal of a token to cryptocurrency exchanges.

The Secret to the Success of Meme Projects

While part of society considers investing in meme coins insane; others receive up to 1,000% of the net profit. In addition to high profitability, the speed of project development also matters—usually, the value of coins skyrockets in just a few months from the start of sales. Many investors get involved in this area only to study it from the inside. Everyone has their reasons to try meme tokens. There is no single correct answer here. 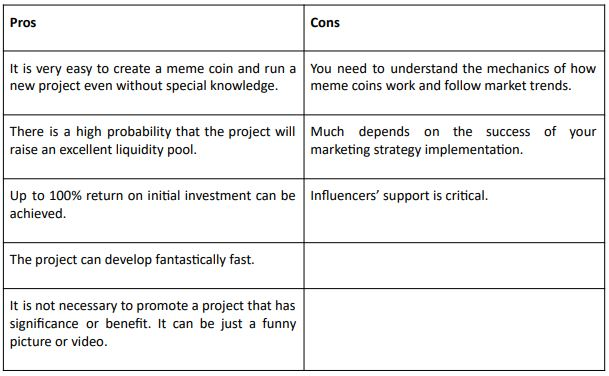 How to Make a Meme Coin?

Use the MetaMask tool or take the source code of another token and create a new crypto-coin based on it.

What Do You Need for Making a Meme Coin?

You need to catch the trend and have at least a minimal technical background to know how to create a meme coin. You also need to invest a lot of effort in promoting the project.

Will You Need an ICO for Creating a Meme Coin?

It is not mandatory, but you can go through the ICO procedure if you see this as a prospect for the project development.

In December, Binance Bahrain was awarded a provisional license, then in March, a full license

In spite of opposition from the central bank and the budget committee, the Paraguayan Congress has adopted a new crypto regulatory measure